Spunk Monkees have grown to become a bonding musical tradition for all types of people throughout Northeast Mississippi and beyond! From Anchorage, Alaska to Key West, Florida and everywhere in-between including: Las Vegas, Destin, Dallas, Houston, Panama City, Chattanooga, New Orleans, Knoxville, and Nashville to name a few. Matt Nolan, Jody Lindsey, Mark Lynam and Shaun Miller have made the Spunk Monkees synonymous with partying, good music, and good times.

Spunk Monkees got their start in the small town of Myrtle, Mississippi, in the early 90’s as a country band called Misbehavin’. They releases an album of original material and played hundreds of country shows, but ultimately the rock and rebel within could not be denied and Spunk Monkees was born. With a set heavy in feel-good covers and party songs, “the Spunks” worked hard to become the ultimate party band in North Mississippi.

The band is known for it’s live shows, where solid musicianship, high-energy performance, and top quality sound, light, and video production results in a stage show that emulates the rock legends they grew up adoring.

This culminated in a night they will never forget in May 2011, where Spunk Monkees opened up for rock legends Poison and Warrant at Poison’s 25th Anniversary Tour kick-off date in Tupelo, Mississippi. The band gained wide acclaim for their inspired performance and carved out their own spot on the arena stage with their heroes.

That’s a reputation the band has established and developed through hard work and endless touring throughout their 20+ year history. With relentless effort and high expectations, the Spunk Monkees are eager to see what rewards the future will bring. 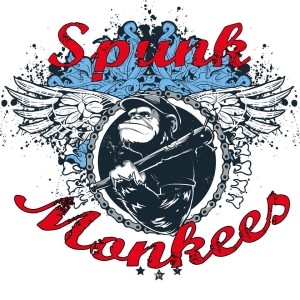 Monkey With A Bat